Gobi Desert tour through the Orkhon Valley to steppe.

Orkhon Valley is located North of the province of Ovorkhangai, in the central part of Mongolia, about 360 kilometers from Ulan Bator. Located at the foot of the Khangai range. Orkhon Valley is a large place of nomadism where many breeders usually set up their camp for every season.
Mongolian Steppe, Great valley and Gobi desert waits for you in this tour in the heart of the nomadic life.

From wild horses to Orkhon valley, visit nomads and go towards South of Mongolia, to Gobi desert where the track disappears to give place to a legendary spot : the Gobi Desert, and the arid majesty of its lunar landscapes, with its towering rocky formations, frozen canyon, sand dunes and nomads with camels.

The Gobi Desert is a vast, arid region in northern China Inner Mongolia and southern Mongolia. It's known for its dunes, mountains and rare animals such as snow leopards and Bactrian camels. In the Gobi Gurvansaikhan National Park, the Khongoryn Els sand dunes are said to sing when the wind blows. The park also features the deep ice field of Yolyn Am canyon. Dinosaur fossils have been found at the red "Flaming Cliffs" of Bayanzag.
Gobi Desert is covering Mongolian these provinces: Bayankhongor; Dornogovi; Dundgovi; Govi-Altai; Govisümber; Ömnögovi; Sükhbaatar and it is going to Inner Mongolia.

The Gobi measures over 1,600 km (1,000 mi) from southwest to northeast and 800 km (500 mi) from north to south. It occupies an arc of land 1,295,000 km2 (500,000 sq mi)[3] in area as of 2007; it is the sixth-largest desert in the world and Asia's 2nd largest. Much of the Gobi is not sandy but has exposed bare rock.
From Mongolian Gobi archeologists and paleontologists have done excavations in each part of the Gobi Desert, which is noted for its fossil treasures, including early mammals, dinosaur eggs, and prehistoric stone implements, some 80 million years old.

The Mongolian government established the Great Gobi Desert National Park in 1975 and the UNESCO registered as the Great Gobi Desert as the fourth largest Biosphere Reserve in the world in 1991. Mongolians consider that there are 33 different Gobi, where sandy desert occupies only 3 percent of the all territory. The area is often imagined as a lifeless desert like in many other parts of the world. Gobi Desert is a land of dinosaurs and it is the home for camel breeders rich with wildlife and vegetation. Dinosaur skeletons and their petrified eggs have been preserved here to the present day. Wild asses, camels, snow leopards, mountain sheep and gazelles flourish here, as do different types of flora. 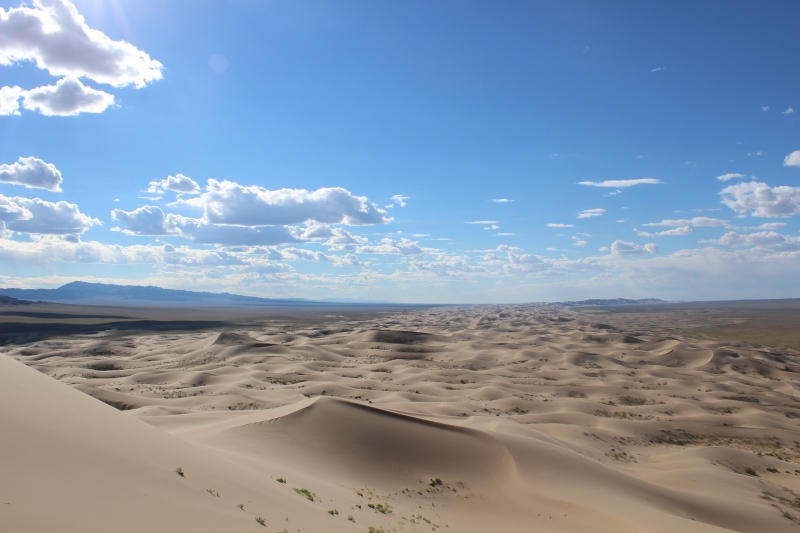